Can I have pumpkin pie, ma?

When I was a young lass I used to read the Babysitters Club books where they’d talk about strange desserts like pumpkin pie. ‘Pumpkin Pie?’ I’d think, ‘Who’d eat a dessert made from a vegetable?’

Years later Melbourne was lucky (?) enough to have USA Foods open where we can buy everything from cookies masquerading as breakfast cereal and Libby’s pumpkin pie filling. Out of sheer curiosity I made a pumpkin pie and liked it. This one is a bit different as I made it from a pumpkin rather than the caned stuff and are a bit surprised that it looks successful. I’m yet to taste it though. 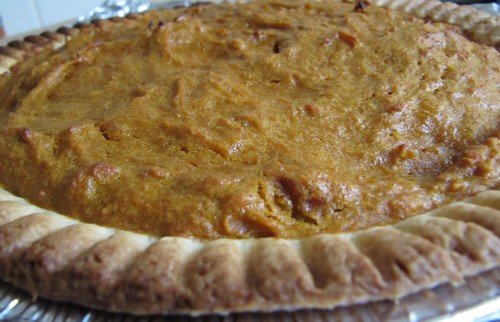 Half a pumpkin. I used a Queensland Blue, but a Butternut would probably work better.

1 tbs Pumpkin pie spice. I got mine from USA Foods, but you can mix your own from cinnamon, nutmeg and all spice.

1. Cut up the pumpkin, wrap in foil and bake until soft.Cool.

2. After the pumpkin has cooled, puree it.

3. Remove water from the pumpkin by wringing it out in a cloth.

4. Mix pumpkin with other ingredients.

5. Pour into shell and bake at 180’C for roughly 40 minutes. If the crust starts to burn wrap foil over the edges. The pie is cooked when a knife comes out clean.

Refrigerate and enjoy with cream or ice cream.

This website uses cookies to improve your experience while you navigate through the website. Out of these, the cookies that are categorized as necessary are stored on your browser as they are essential for the working of basic functionalities of the website. We also use third-party cookies that help us analyze and understand how you use this website. These cookies will be stored in your browser only with your consent. You also have the option to opt-out of these cookies. But opting out of some of these cookies may affect your browsing experience.
Necessary Always Enabled
Necessary cookies are absolutely essential for the website to function properly. This category only includes cookies that ensures basic functionalities and security features of the website. These cookies do not store any personal information.
Non-necessary
Any cookies that may not be particularly necessary for the website to function and is used specifically to collect user personal data via analytics, ads, other embedded contents are termed as non-necessary cookies. It is mandatory to procure user consent prior to running these cookies on your website.
SAVE & ACCEPT
Loading Comments...